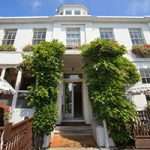 A Pocket History By Andrew Chambers

La Collinette Hotel was built by a local doctor towards the end of the 19th Century. Its fine structure and large proportions made it suitable for him to use the property as both a home and surgery. The gardens were extensive and the property situated extremely conveniently for the town, offering fine panoramic views to the north and west coasts of the island. These views can still be enjoyed from the rear of the property, but ironically, the best time to enjoy them is on dry, cold, clear days in the winter when the surrounding trees of the hotel gardens and adjacent nursery are bare of leaves.

During the Second World War, the island was invaded by the forces of the Third Reich. As a consequence of its elevated, strategic location, the house was occupied and became the headquarters of Naval Signals for the entire Channel Islands with a direct radio link to Hitler Command Centre in Berlin.

During this time, the vegetable garden at the rear of the house was excavated and an emergency reservoir installed. At the end of the war, hungry local scavengers would sometimes be found in the dead of the night, attempting to supplement their meagre diet by catching one of the many plump carp the Germans had bred in the water tank. Needless to say, the carp didn’t survive too long!

There are many reminders of the Occupation around the old part of the building including the bunkers, gun positions at the front gates and as recently as 1990, there were some old cartoons and jokes, which had been painted around the hotel (in some rather odd places), displaying the sense of humour of certain of the German soldiers!

The most obvious remnant of the occupation is of course, the substantial complex of bunkers located to the west of the property, which were completed towards the end of the war to protect the navel signals operation. The commandant who supervised the construction was a fairly regular visitor to the island until the eighties. 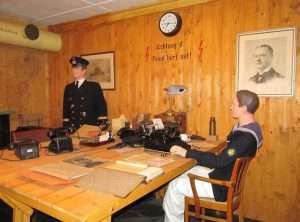 The construction itself was a triumph of engineering, slave labour and shuttering. We have been told that, having completed the entire complex in its shuttered form, two huge, turbine concrete mixing contraptions were assembled on site, and the concrete poured continuously for forty-eight hours, until the bunkers were finished. All the concrete was transported from the machines to the site by wheelbarrow. This was a Herculean task, which wouldn’t even be contemplated today. There are three main bunkers, which nowadays, have been put to more “modern” use comprising, the hotel workshop, a sound recording studio and a wonderful museum, which replicates exactly the appearance of the bunker during the war years. 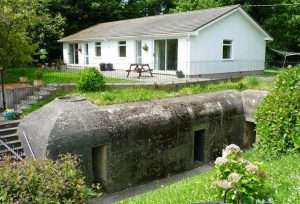 There are many fine relics on display, including the commandant’s personal revolver, which he hid in an airshaft just before the bunker was surrendered to the Allied Forces on May 9th, 1945. It was not discovered until the renovations took place in the late 1990’s, even though the bunkers were used for many years as the scout troop headquarters for Elizabeth College, the local public school.

Furthermore, from a practical viewpoint, the bunkers also serve as good, if not somewhat overlarge foundations for some of our self-catering cottages! However, there were a few problems with the foundations to start with, as it transpired the German engineers had carefully constructed all the roofs with a shallow, convex curve on them, to ensure rainwater did not settle on the bunkers. Clever chaps weren’t they!

The bunkers are in superb condition, well worth a visit and if there ever is, God forbid, a nuclear war, try to ensure you are staying at The Clubhouse when it starts – “we’ll all be in the bunker until it’s safe to come out again!” (Note to reservations department…arrange special rates for bunker guests should the worst happen!)

In the 1950s La Collinette Hotel was opened with just eleven bedrooms and a derelict bowling alley in the garden. The emergency reservoir was restored to a “veg” patch and in 1960, a recently retired, fighter pilot, Sqn. Ldr. Peter Chambers and his wife Peggy took over the ownership. These were the halcyon days of Guernsey tourism and the new owners traded the hotel in an exemplary fashion. No sooner than having completed the first year, they were expanding and upgrading the hotel. This has continued at regular intervals until today, when the hotel has accommodation amounting to approximately 100 beds in total.

In the early days, whilst Peggy Chambers spent the winters rattling out up to sixty enquiry replies per day on an old manual typewriter, Peter furiously painted and decorated and maintained his involvement with the Guernsey Tourist Board. Summers were what we now call “24/7”, starting at 6.30 each morning. Life was arduous but equally rewarding. On sunny afternoons, they could both be found in deck chairs, just outside the office door within easy reach of the telephone, should there be any bookings to deal with!

In 1974, Andrew, their son arrived back from six years “learning” the business in the UK and the Management team became three.

With the onset of the eighties, hotel tourism started to change in style into a much more global concept. Guest expectations became international and as a consequence, changes took place at La Collinette to meet the demand for a much more cosmopolitan style of hotel business. The most specific of these changes was the introduction in 1987 of self-catering with the development of seven cottages, within the gardens of the hotel. This major investment transformed the business and later, as the result of the success of the move away from a fully catered operation, Margaret House, a block of seven apartments was developed and completed in 1996/1997. The self-catering operation at La Collinette has enjoyed 90% plus levels of occupancy since its inception.

Many things have changed at La Collinette since November 1960, when the Chambers family first arrived. Sadly, Peter Chambers passed away in 1987 whilst, indicative of the personality of both the hotel and its management, Peggy Chambers was still “in situ” in her eighty-ninth year. She came in seven days a week except when away on holiday, but not for quite so long as she did in the early days!

Very sadly, Peggy, my Mother and the matriarch of the hotel became ill in June 2006 and passed away early 2007. I and my loyal team of staff have lost a very dear friend, as have many of our regular band of returning guests. Peggy will be very sadly missed and the hotel will never be the same again.

That said, the hotel itself is continuing to undergo many structural changes to keep pace with the demands of tourism in the twenty first century, not the least of which has included the change in name to The Clubhouse @ La Collinette Hotel, Cottages and Apartments.

Many changes have been made at La Collinette, but true to the original aims and ambitions of Peter and Peggy Chambers nearly fifty years ago, nothing has really changed at all, The fact that so many of our guests and friends continue to return so often, persuades us to preserve the old values as a major part of any ambitious plans for the future.